The Top Ten Cities for Job Growth in 2022 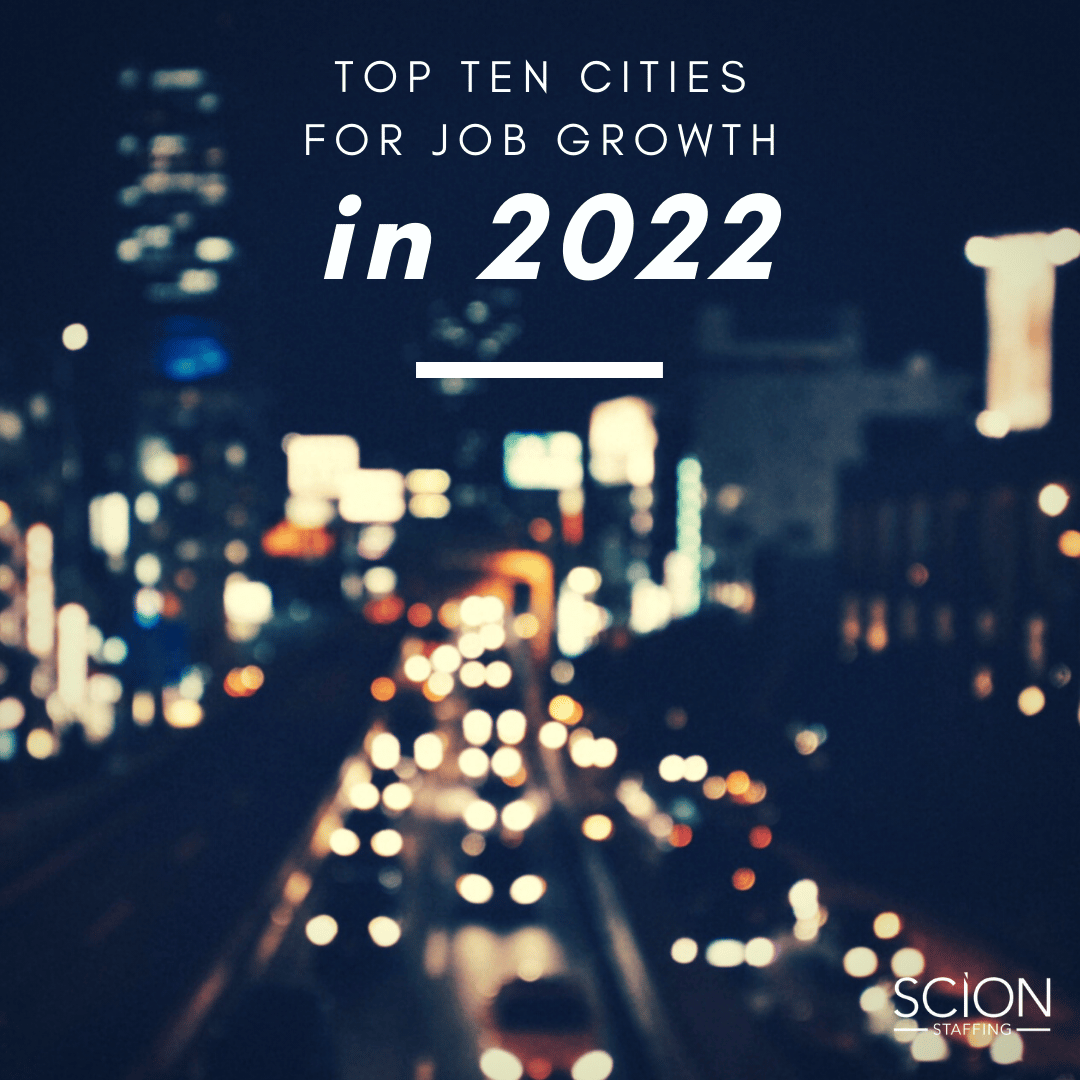 The new year is among us and with the new year comes a lot of changes. After the events of the past couple of years, positive change is something that a lot of job seekers are hoping for. However, with the recent rise of the newest coronavirus variant, the Omicron variant, the outlook for the American economy for 2022 now faces a lot of unknowns heading into the new year. The new variant hasn’t slowed down people getting back to work though, as unemployment has continued to drop in the United States and will likely continue that trend into 2022. With more people looking to either return to work or seek another job, there are certain cities that could seem a lot more appealing in their searches. In this blog, we’ll be discussing the top ten cities for job growth in 2022 based on data from the Bureau of Labor Statistics and other sources including Moneygeek. We’ll also discuss some of the reasons why these cities may have seen such high levels of job growth over the last few years and why they are attractive options for job seekers.

While Milwaukee, Wisconsin may seem like an odd choice for being one of the top 10 cities for job growth in 2022, it’s actually not too far off the mark. According to the U.S. Department of Commerce, Milwaukee was ranked fourth in terms of its overall employment rate at the end of 2018. The area has plenty of available jobs and is becoming a hot spot because of its strong job market. Additionally, the city is experiencing a period of growth in their own entertainment centers with the recent success of their sports franchises and has the second-most affordable housing market on the list.

Atlanta, Georgia is one of the biggest hubs in the country for many major companies and has been for many years. However, it still remains one of the top cities for job growth in 2022. According to Moneygeek, the Atlanta metro area has the seventh-lowest job competition in the nation. This is great news for people looking to secure a job in the area, along with the great rate of both job and income growth in the near future. According to the BLS, Atlanta is a hotspot for job seekers in the medical field including obstetricians and gynecologists, surgeons, and dentists.

The city of St. Louis, Missouri is one of the fastest growing cities in the country. With extremely affordable housing, decently low job competition, a low cost of living, and good growth expected, it makes the city an attractive choice for job seekers in 2022. The city itself is a beautiful city with a very rich history, great food scene, and plenty of entertainment.

Charlotte, North Carolina is the seventh city on this list and while the housing affordability and job competition aren’t as attractive as some of the other cities on this list, the Charlotte area has had some of the highest growth in jobs and wages in 2021. The cost of living in Charlotte is on the lower end among other cities on the East Coast and the high-paying tech sector has experienced quite a boom in the region. It is also the nation’s second-largest banking center, only behind New York City. With plenty of entertainment, an efficient public transportation system, and a lot of outdoor activities to choose from, Charlotte, North Carolina makes for a great location for job seekers.

If you’re looking for a new job, the area of Tampa-St. Petersburg, Florida can be an excellent choice. The area has an extremely low job competition and has the best housing affordability of the cities on this list. The job market isn’t growing at a very quick rate like some of these other cities, but there are still plenty of new opportunities arising. There are a lot of bilingual job opportunities due to the cultural diversity in the area and the biggest industries that are hiring are healthcare services, finance, and shipping.

One of the most popular tourist destinations in the country due to its rich music culture and entertainment scene, Nashville, Tennessee is becoming one of the most popular spots for job seekers in 2022. The city boasts an extremely low unemployment rate, and the cost of living is relatively low in comparison to some of the other big cities in the Midwest. The area has some job competition, but it still remains on the low side.

Fourth on this list comes Indianapolis, Indiana. The area surrounding Indianapolis has experienced significant growth in both jobs and wages and has relatively low job competition compared to the national average. The city has experienced a prominent boost in the tech industry, with many startups and tech companies making their home in Indianapolis. For those looking to relocate, Indianapolis offers beautiful parks, a good food scene, and pro sports teams for entertainment.

The city of Jacksonville, Florida is becoming quite the target for job seekers and could become a bigger target in 2022. The city is experiencing great economic growth and has plenty to offer for those looking for a fresh start. The city has the lowest living costs in the state, almost no job competition, and with no state income tax, finding a job in Jacksonville certainly has its perks. With a professional football team and a location rich with parks and beaches nearby, there is quite a bit of entertainment.

The second-highest city for job growth in 2022 is the city of Birmingham, Alabama and the surrounding area of Hoover. The unemployment rate in the area is below the national average and it has been experiencing quite a growth in the jobs market. There are good job opportunities in the manufacturing sector. The cost of living is exceptionally lower than surrounding cities and states and will likely remain low even as housing prices continue to rise. An area with a rich history, plenty of coastline to enjoy, and Alabama college football, what more could you ask for?

The city with the biggest job growth in 2022 is Salt Lake City, Utah. The city is experiencing job and wage growth at a higher pace than the national growth rate and has virtually no job competition, as well as decent housing affordability. Salt Lake City is becoming an attractive choice for job seekers due to its competitive cost of living and having the lowest crime rate in the country. It also boasts a very low unemployment rate, coming in at under 3%, well below the national average. If you love the outdoors, Salt Lake City will look to be a paradise with so many opportunities to hike, bike, fish, ski, and snowboard, as well as visiting one of the five national parks in the state.

Scion Staffing can help you find your next opportunity!

Scion Staffing is proud to offer award-winning direct hire and temporary staffing services in whatever part of the country you’re looking to be in! When you partner with us, you can rest assured that regardless of your needs or staffing numbers we are able to seamlessly support your team. To learn more about our recruiting and staffing services, please contact us today. Additionally, to learn more about Scion Staffing, we invite you to visit our about us page!

3 Signs You’re Working with a High-Quality Recruiter
How to Effectively Manage Temp Staffing
Top Growing Industries for 2022
What does the U.S. economy look like for 2022?
A Year in Review: Our Impact on the Staffing World
Back to Blog
We use cookies on our website(s) to give you the most relevant experience by remembering your preferences and repeat visits. By clicking “Accept”, you consent to the use of ALL cookies and agree to our Privacy Policy and Terms of Service.
Do not sell my personal information.
Cookie SettingsAccept
Manage consent

This website uses cookies to improve your experience while you navigate through the website. Out of these, the cookies that are categorized as necessary are stored on your browser as they are essential for the working of basic functionalities of the website. We also use third-party cookies that help us analyze and understand how you use this website. These cookies will be stored in your browser only with your consent. You also have the option to opt-out of these cookies. But opting out of some of these cookies may affect your browsing experience.
Necessary Always Enabled
Necessary cookies are absolutely essential for the website to function properly. These cookies ensure basic functionalities and security features of the website, anonymously.
Functional
Functional cookies help to perform certain functionalities like sharing the content of the website on social media platforms, collect feedbacks, and other third-party features.
Performance
Performance cookies are used to understand and analyze the key performance indexes of the website which helps in delivering a better user experience for the visitors.
Analytics
Analytical cookies are used to understand how visitors interact with the website. These cookies help provide information on metrics the number of visitors, bounce rate, traffic source, etc.
Advertisement
Advertisement cookies are used to provide visitors with relevant ads and marketing campaigns. These cookies track visitors across websites and collect information to provide customized ads.
Others
Other uncategorized cookies are those that are being analyzed and have not been classified into a category as yet.
SAVE & ACCEPT
Powered by

Hire Staff
Apply
About Us